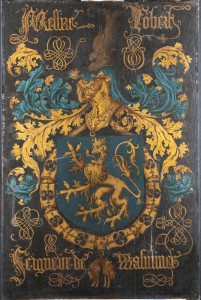 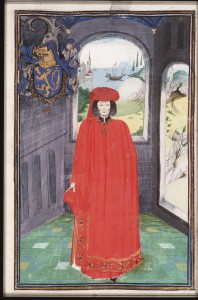 The presence of the Coat of Arms of Robert of Massemen in the collection in The Hague is striking, since this knight died as early as 1430, so that there is no way that he could have attended the 1456 Chapter. Just as striking is the omission of the Coat of Arms of a knight who during the 1456 Chapter was, indeed, a member of the Order of the Golden Fleece (yet did not physically attend the Chapter in The Hague), i.e.: John II of Alençon, Duke of Alençon and Count of Perches.

Heraldic studies of this Golden Fleece Coat of Arms are nevertheless relevant. The armsis correct and well identifiable. The fish in the crest can be identified as a dolphin. The heraldic dolphin was sometimes faithfully depicted, at other times not, so that there were many variants in the Middle Ages. The escutcheon in The Hague shows a non-true-to-life variant.