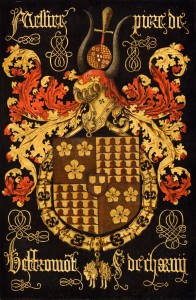 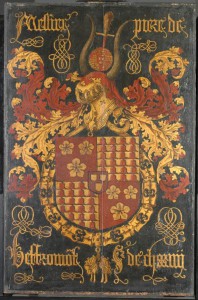 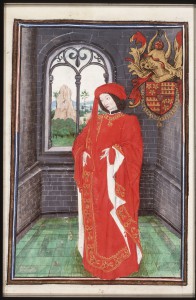 In the sixteenth century mistakes were made in the representation of the shield and the crest, but a seventeenth-century repainting of quarters II and III tried to remedy those errors. So, the upper layer of paint, which is still visible now after the SRAL treatment, was a later correction.

Quarters I and IV show the Vergy family arm, a reference to Peter of Bauffremont’s descent from this house through his mother Jeanne of Vergy.

In the sixteenth century, in quarters II and III vair beams in the colours blue and silver were originally painted, alternated with red beams. These original paint layers were found during the SRAL treatment. In the seventeenth century this was repainted small vair in pale in gold and red, the Bauffremont family arm. This repainting is confirmed by registrations of the Coats of Arms in The Hague in the seventeenth and eighteenth centuries.

The colour of the heart shield shows that the armswas still not fully correct after that seventeenth-century operation. For the armsof the manor of Charny, which the caption refers to, includes three silver shields instead of the golden shields shown in the Golden Fleece Coats of Arms in The Hague.

Crest: two silver horns; in between on the helm a ball with the quartered shield as described above; a sword thrust in the ball from above, with red edge, golden parrying bar, and a golden plume for a hilt.