Philip the Good’s Coat of Arms 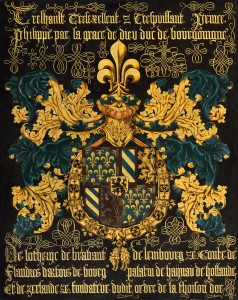 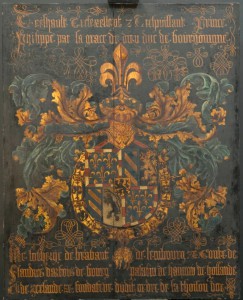 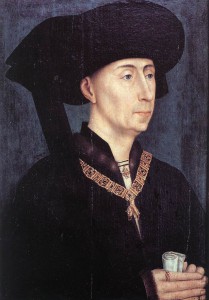 Philip of Burgundy, Duke of Burgundy, Lorraine, Brabant and Limburg, Count of Flanders, Artois and Burgundy, Count Palatine of Henegouwen, Holland, Zealand and Namur, Marquis of Saint-Empire, Lord of Friesland, Salins, and Malines. The elements of the Coat of Arms refer to the most important districts that were controlled by the Duke to a greater or lesser extent. For example, “in black a golden lion, armed and langued of red” stands for the Duchy of Brabant. This Coat of Arms is the largest in size, and hierarchically the most important of the collection.

Underneath his escutcheon is a text plate stating Philip the Good’s motto: “Aultre n’aurray”. Literally: I will not have another.