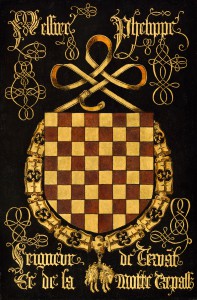 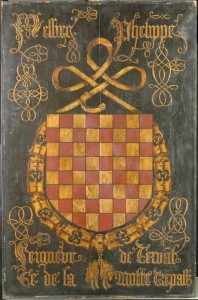 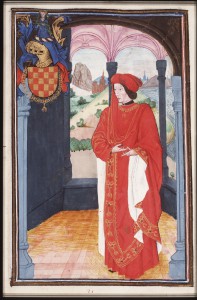 Unlike the other knights who were members of the Order of the Golden Fleece in 1456 very little is known about Philippe de Ternant. The agenda for the Eighth Chapter in Bergen (Mons) in 1451 included a discussion of his misconduct. He had allegedly robbed a merchant of his goods and deprived him of his freedom, had not been honest about it, and he was said to have embezzled money. He was incarcerated for over a month. During the Chapter Philippe de Ternant was punished again by his fellow Golden Fleece knights, who sent him to Santigao de Compostela to do penance.

At the Ninth Chapter in The Hague Philippe de Ternant had already passed away. Just as all the other knights who had died before the Chapter in The Hague, in the sixteenth century he was given an escutcheon in which the helm, crest and covers were replaced by a belt.

The ram’s coat pendant hanging from the Golden Fleece chain faces right for the viewer, while the other crests and ram’s costs in the southern series face left – the direction of the original high altar at the Great Church. It can no longer be determined whether this panel was scheduled for the northern series at some point or that a mistake was made at the workshop of the heraldic painter (see also: N04).