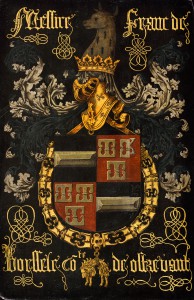 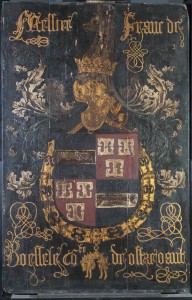 Striking in this Coat of Arms is a stagger, mainly in the right-most pillar and the crossbeam. During the SRAL treatment, it turned out that this was the only painting in the collection that consisted of three boards. The left and right boards contain the original sixteenth-century paint layers, while the centre board was most likely not painted until the eighteenth century. Apparently, this panel was so damaged at some point in history that the only way to restore it was to replace part of the boards. During that operation the outer parts of the two sixteenth-century boards were consciously preserved. In the treatment of this shield in 2013 it was deliberately opted to respect the history of this shield.