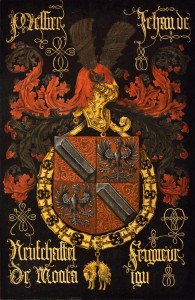 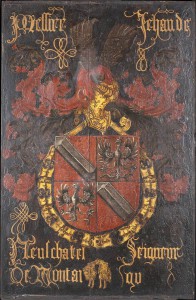 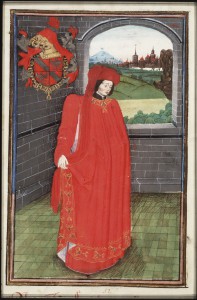 Crest: flight of silver loaded with a crossbeam in silver. Quarters I and IV of the shield show the Neufchâtel family arm. Quarters II and III with the eagle show the old coat of arms of the Free County of Burgundy. The Golden Fleece knight John II of Neufchâtel chose this shield in imitation of his great-uncle and namesake John I of Neufchâtel. Great-uncle John had probably chosen this armsto express that he was heir to the possessions in the Free County in the period of 1405-1419. John II of Neufchâtel, in his turn, inherited possessions from his great-uncle John. By choosing to bear the same arm, this knight deliberately chose to stand in a certain tradition.

Strikingly, these men from the House of Neufchâtel were both removed from the Order of the Golden Fleece. In 1481 John II was cancelled as a member because of felony (disloyalty of a vassal towards his lord. Although there are no sources in respect of the fifteenth-century collection of Coats of Arms in The Hague evidencing this, it is known that Golden Fleece Coats of arms were removed, hung upside-down or replaced in response to similar events. The crest is facing right and the ram’s head left. It is not certain whether this is related to the removal of John II of Neufchâtel from the Order.