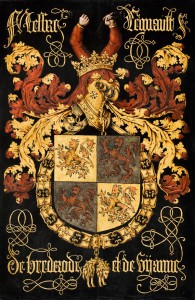 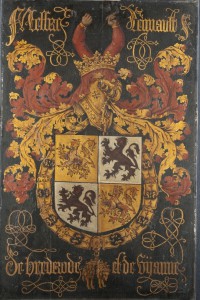 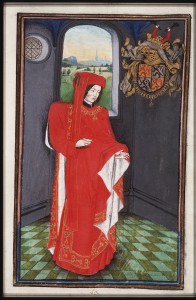 The reason for organizing the Chapter in The Hague in 1456 was the conduct of Reinoud II van Brederode. He had helped his brother Gijsbrecht become the Bishop of Utrecht, to the dissatisfaction of Philip the Good, who preferred his own illegitimate son David of Burgundy as bishop. Gijsbrecht was forcibly replaced and Reinoud’s role was investigated. Reinoud’s position in the Hook and Cod Wars and his loyalty to Philip the Good were also under discussion. The Lord of Brederode did not come to the Chapter in The Hague of his own accord. Philip the Good had him collected in Vianen by Henry II of Borssele, Lord of Veere (Z07). When Reinoud finally arrived, he apologized and had to make his plea in defence to the charges.

Not all the details of this Coat of Arms are correct. The lions in quarters I and IV refer to the descent of the family of Brederode of the Counts of Holland. These Brederode lions were originally red (not gold!), langued and armed in blue. In the Coat of Arms in The Hague only remainders of a red glacis were preserved. Around 1334 the Brederode armswas quartered with the Valkenburg arm. Quarters II and III show the lion of Valkenburg, but not in the heraldically correct double tail. The tongue and nails of this lion are usually red or gold, but in the escutcheon in The Hague they turn out to be blue.
The crest consists of a bull in red, horned in gold, around its head a bend in three rows of chequered in silver and red. Only the tips of a coronet stick out over the bend that is chequered in the colours silver and red.