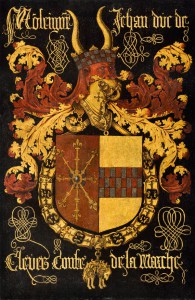 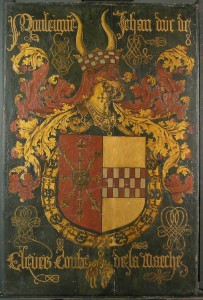 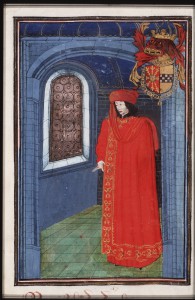 The left part of the shield with a silver heart shield in a red field with a gold carbuncle across refers to the County, and after 1417 the Duchy, of Cleves. In the battlefield a carbuncle may have served as reinforcement of the shield, made of the metal mount of the shield knob that was affixed to the outer side of the wooden shield as reinforcement. In heraldry the carbuncle is usually represented by eight spokes coming out of a small circle, more or less decorated, in this case with lilies at the tips. The figure is also called a fleury wheel.

The left part of the shield, with three rows of chequered crossbeams in silver and red in a gold field, shows the armsof Van der Mark; the manor that was controlled by John I of Cleves after 1444.

The crest with the horned bull and silver-red chequered bend is also a combination of elements originating from the arms of both districts. John I of Cleves succeeded his father Adolf as the Duke of Cleves and Count of the Mark after the latter’s death in 1448.