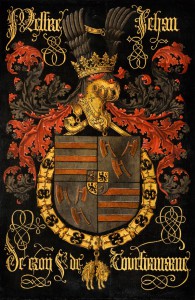 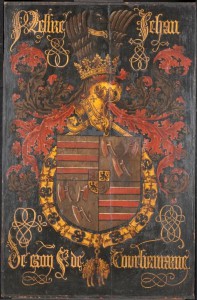 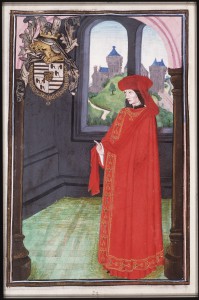 John II, as the younger son, added to this quartered shield a heart shield to ‘divide’ the arms; after all, according to the rules of inheritance, only the eldest son could carry his father’s crest after he died. Quarters I and IV of the heart shield on the Coats of Arms in The Hague are heraldically incorrect. They are supposed to display the Craon arms- lozengy gold and red. Craon refers to the origin of John II’s mother Margareta of Craon, from whom he inherited the manor of Tours-sur-Marne (see inscription on the Coat of Arms). Quarters II and III, showing a black lion on a golden field, refer to Henegouwen, where John II of Croÿ was viceroy. John II was the younger brother of the Golden Fleece knight Antoon of Croÿ (N03).

Crest: a dog (greyhound) in black (sable), armed, in full course against a silver background, collared in gold with a gold-coloured pendant.