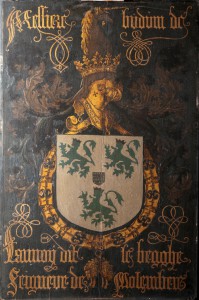 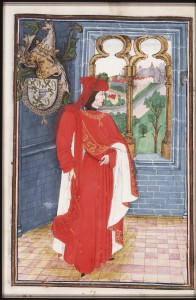 The heart shield is not correct either. The heart shield carried by this knight shows crossbeams in silver and blue (azure). After all, that is the crest of Molembaix (Molenbeek), the manor to which the caption of the Coat of Arms refers. Boudewijn inherited this manor from his mother Catherina Gobiert of Corbion, Lady of Molembaix.
Although hardly recognizable for corrosion of the underlying silver layer, better preserved source material shows that the three lions in the armswere once a bright green.

While the crest is turned to the right for the viewer – i.e. originally in the direction of the high altar in the Great Church – the ram’s coat is erroneously facing left (see also: Z04). Since the helm is properly oriented, this discrepancy should simply be considered a mistake. Coats of Arms and associated products were constantly worked on in the heraldic painter’s workshop. To produce high volumes over a short period of time, the production process was standardized using fixed working methods and patterns. Mistakes were easily made.