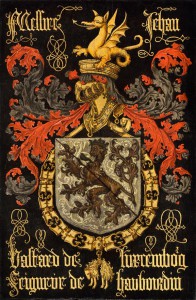 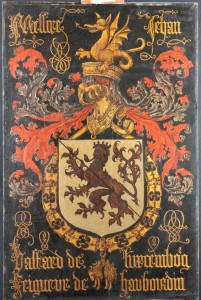 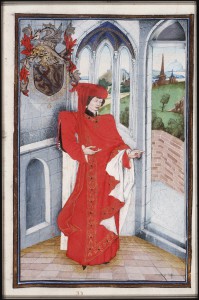 The family armsof the House of Luxembourg consists of a red, double-tailed lion on a silver field. The father of this knight – Waleran III of Luxembourg, Count of Saint Pol – bore the family armsto which his illegitimate son John of Luxembourg added a diagonal stripe or stake as a distinctive sign.

Although today the lion seems to be a dark brown, all the visual, historic sources show that it was originally a bright red. Natural obsolescence has caused the degradation of this colour. Traces of the bright red pigment can still be found in the black diagonal stripe.

The crest showing a winged dragon coming out of a tub is a fixed element of the arms of various members of the House of Luxembourg from (at least) the first half of the fifteenth century. Heraldic studies of various sources show, however, that it should be silver rather than gold.