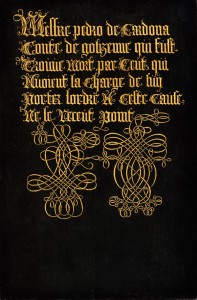 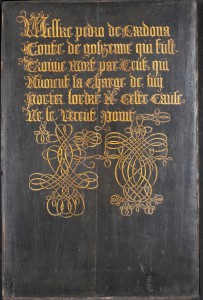 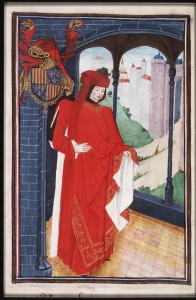 This Golden Fleece Coat of Arms tells us in Medieval French – without naming all the names – that Peter of Cardona had passed away when in 1451 the King of Arms Jan le Fèvre (Lord of Saint-Rémy) came to Sicily with Jacob of Lalaing (N09) and John II of Croÿ (N05) to present Peter with the Golden Fleece chain.

In 1451 Peter of Cardona was nominated and appointed knight of the Order of the Golden Fleece during the Chapter in Bergen (Mons). This happened in light of Philip the Good’s (Ph) intention to undertake a crusade. To do that, he needed the support of Alfonso V, King of Aragon and Sicily (N01), which he hoped to get by knighting two of the latter’s most important subjects. Peter of Cardona never wore the Golden Fleece chain. That was probably the reason that in the sixteenth-century collection he received a different Golden Fleece Coat of Arms than the other knights who had passed away since the latest Chapter.