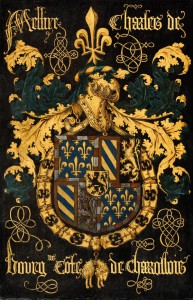 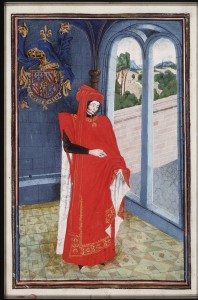 Charles the Bold (1433-1477) was Philip the Good’s son (see PH). His mother was Isabella of Portugal. Charles the Bold was the second sovereign of the Order of the Golden Fleece (1467-1477). The Coat of Arms is identical to his father’s, albeit slightly smaller in size.

The crest consists of a gold lily. Before the SRAL treatment, two heraldic errors could be pointed out: the blue colour of the hem in quarters II and III, and the black colour of the lion in quarter III. Registrations of the Golden Fleece Coat of Arms in The Hague show that both the helm and the lion were originally red, which is heraldically correct.

A material and technical study confirmed the repainting. The engraving based on this Coat of Arms in the historic work by Jacob de Riemer on The Hague (1730) makes it possible to date both repaintings after 1730.