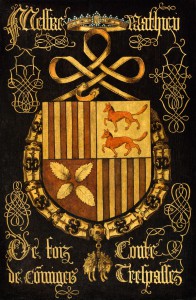 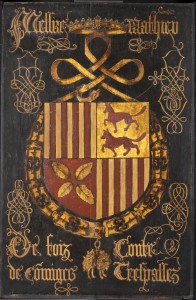 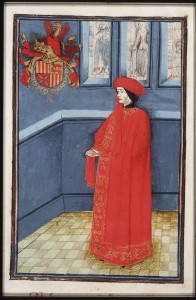 Apparently, in the sixteenth century people were not well aware of the fifteenth-century armsof Mathieu of Foix, Count of Comminges. Quarters I and IV represent the County of Foix, quarter II stands for the Viscounty of Béarn, and quarter III for the County of Comminges. The Foix coat of arms, however, consists of three red poles in a gold field, instead of four, as shown in the Coat of Armsin The Hague. The Béarn armsconsists of two cows or bovines placed over each other, whereas the Coat of Armsin The Hague shows two foxes. According to nearly all the visual and textual historic source material, the almond-shaped leaves of Comminges should be silver rather than gold as shown in the Coat of Arms in The Hague.