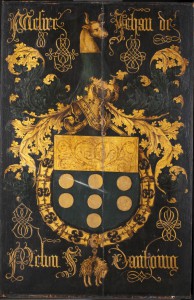 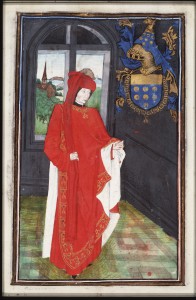 The crest consists of a head of a bovine animal (cow, bull or ox?) in gold. The coat of arms with seven gold discs in blue (3-3-1) and a gold shield head represents the Viscounty of Melun. This armsand crest were carried by the Melun family since at least the fourteenth century. The manors of Antoing and Épinoy were inherited by John IV after his father’s death in 1406, but he became Viscount of Melun in 1415, succeeding his uncle William of Melun.