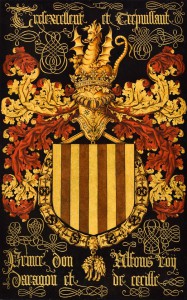 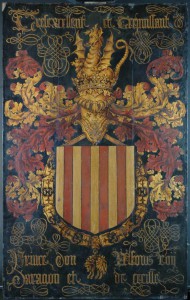 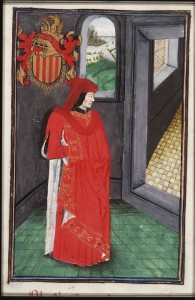 Important Golden Fleece knights got larger Coat of Arms. Like Alfonso of Aragon, King of Aragon and Sicily.

The family armsof the Kings of Aragon consisted of four red poles in a golden field. It had been used by the rulers of this dynasty since the twelfth century and remained their family arms after Alfonso V of Aragon. The name of this knight is surrounded with words of honour and prestige (“Tresexcellent et Trepuissant Prince, Don…”) because of his high position and his power in certain districts.